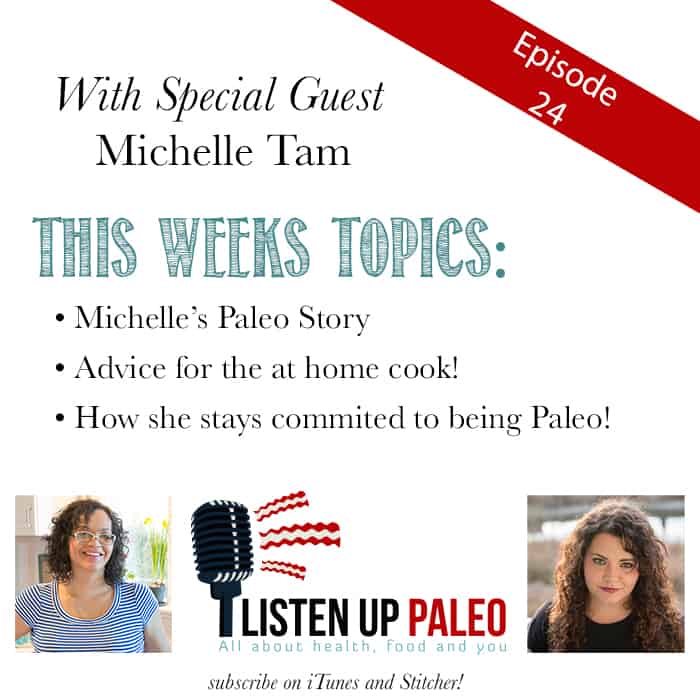 This week we chat with Michelle from Nom Nom Paleo about all things paleo and yes, we go on a tangent or two.

Go forth + listen on Itunes or Stitcher, enjoy and don’t forget to subscribe + leave us a review!

{0:00}: Welcome Michelle!!
{4:45} Michelle’s Paleo Story
{7:45} The Nom Nom Family Paleo Timeline!
{12:00} Michelle’s creative inspiration for easy, approachable recipes
{18:35} Michelle’s advice for the at home cook wanting to get a little bit more creative with their meals.
{22:45} How Michelle stays committed and consistent with Paleo
{28:30} We talk a little reality TV 😉
{32:18} What’s next for Nom Nom Paleo?
Michelle Tam is the food nerd and working mom behind Nom Nom Paleo, a popular food blog that was recognized by Saveur Magazine as the world’s Best Special Diets Food Blog in 2012. Along with her husband, Henry Fong, Michelle wrote a cookbook, Nom Nom Paleo: Food for Humans, which became a New York Times best seller and a 2015 James Beard Award nominee. Michelle also created the Webby Award-winning Nom Nom Paleo iPad cooking app, one of the App Store’s all-time bestselling Food & Drink apps. Her family recently launched the Nom Nom Paleo Podcast where they gather around the dining room table and discuss how they make a real food lifestyle fun, sustainable, and nomtastic. Michelle earned a Bachelor of Science degree in Nutrition and Food Science from the University of California, Berkeley, and a Doctorate of Pharmacy from the University of California, San Francisco. Along with her husband and two young sons, she lives (to eat!) in Palo Alto, California.