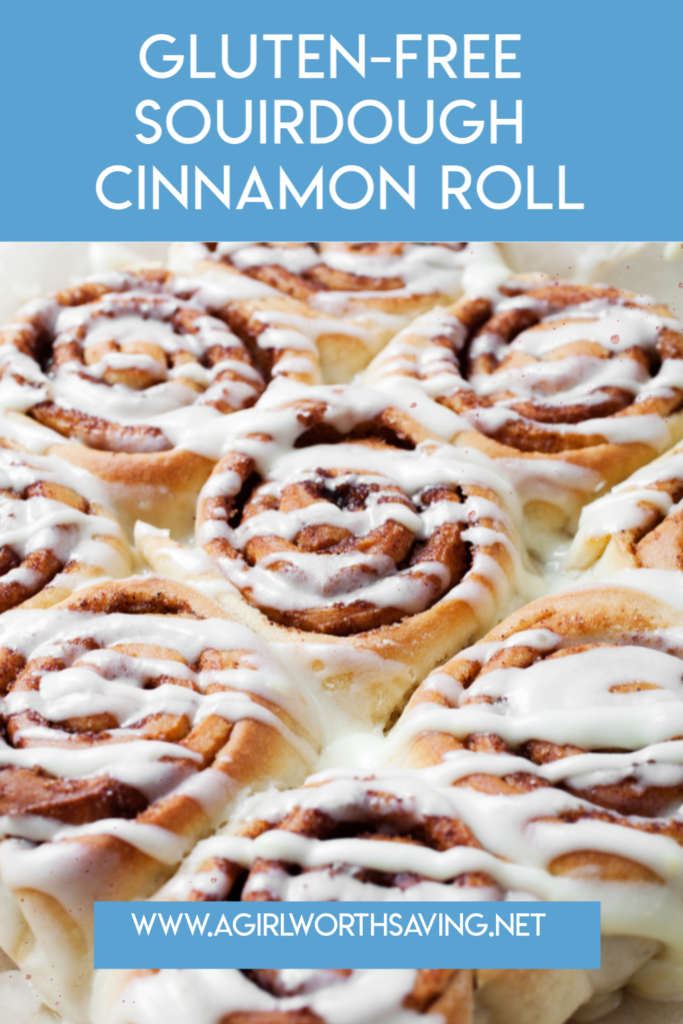 One of my all-time favorite baked goods is a warm and sweet, cream cheese icing covered cinnamon roll. I decided to make the ultimate easy gluten-free cinnamon roll, with the added flavor boost of using a sourdough starter.

Cookies are dreamy, cakes are nice, but cinnamon rolls are just irresistible. And even though gluten-free versions are difficult to find on the market, going gluten-free isn’t going to keep me from enjoying them.

As you know, cinnamon rolls are usually made with store-bought yeast. In this case, I used the wonderful and wild starter I nurtured for the Gluten-Free Sourdough Bread to make naturally leavened gluten-free sourdough cinnamon rolls. The developed sourdough taste takes these cinnamon rolls to the next level of yeasted goodness.

Once you’ve made the effort to bring your gluten-free starter to life, you’re going to be excited to try different doughs. There are endless varieties of breads to try, but loaf bread isn’t the only option you’ve got. Almost any leavened dough can be made using a wild yeast starter. That includes cinnamon rolls – sweet, perfect, delicious, heart-warming cinnamon rolls that are going to excite anyone who tastes them!

I bet you can already smell that dreamy buttery cinnamony goodness wafting from the oven. Or you will very soon.

If you’ve made classic cinnamon rolls before, you know the process can be a little time consuming and somewhat complicated. In this recipe I aimed to create cinnamon rolls that are:

EASY – Using gluten-free flour makes the entire process easier by reducing the amount of work you have to put into the dough to develop the gluten. Instead of spending time kneading, bulk-fermenting and proofing again after shaping, you go straight from mixing the dough to shaping the rolls.

FLEXIBLE – This dough can be made, and proofed for about 3 hours, then baked & enjoyed! If you want to bake them fresh in the morning, the dough can be made and shaped the night before and left to proof overnight in the refrigerator. Either way, you have tasty cinnamon rolls when you want them.

INDULGENT – Let’s face it, cinnamon rolls are a treat. So I wanted to make sure to include the parts of it that make them such a pleasure to eat. For me, that’s a buttery dough, a healthy amount of quality cinnamon, and a thick and rich, perfectly balanced cream cheese frosting.

The night before you plan on making the dough, feed and water your sourdough starter. You’ll need a full cup of starter for the recipe.

With the mixer on low speed, stream in all of the wet ingredients. Add the softened butter and turn the mixer up to medium speed and paddle until all of the butter has been beaten in about 2 minutes. The dough will not be the same texture as a typical wheat dough. The texture is a lot more like a sticky, cookie dough. It’s neither super soft nor very hard.

Brush on the melted butter. Mix the brown sugar and cinnamon, and sprinkle all of it over the dough evenly.

Starting at the top, roll the dough down the shorter (10”) length of the dough. To make the rolling easier, use the oiled parchment paper to guide the dough over and roll. Roll the dough down until the seam is on the bottom of the roll. Cut into 1 ½” slices, about 11-12 pieces.

Arrange the cinnamon rolls into an oiled 9” cake pan or springform pan.

If you’d like to bake the cinnamon rolls the next day, cover the pan in plastic wrap and leave in the refrigerator overnight to proof.

If baking the cinnamon rolls on the same day, proof in a warm area for about 3 ½ hours. I like to turn my oven to 100𝇈F, put the rolls in and turn it off to proof. The dough will puff and fill out the pan.

When you’re ready to bake, preheat the oven to 350𝇈F. Brush the cinnamon rolls with a little melted butter. Bake for about 35 minutes, or until a knife tip or toothpick inserted in several places comes out clean.

In a bowl with a rubber spatula, stir together softened cream cheese, butter, and confectioner’s sugar until it comes together in a soft paste. Whisk in milk until smooth and creamy. Frost the cinnamon rolls all together or one at a time. Or dip your cinnamon roll into the frosting with every bite, I won’t judge you.