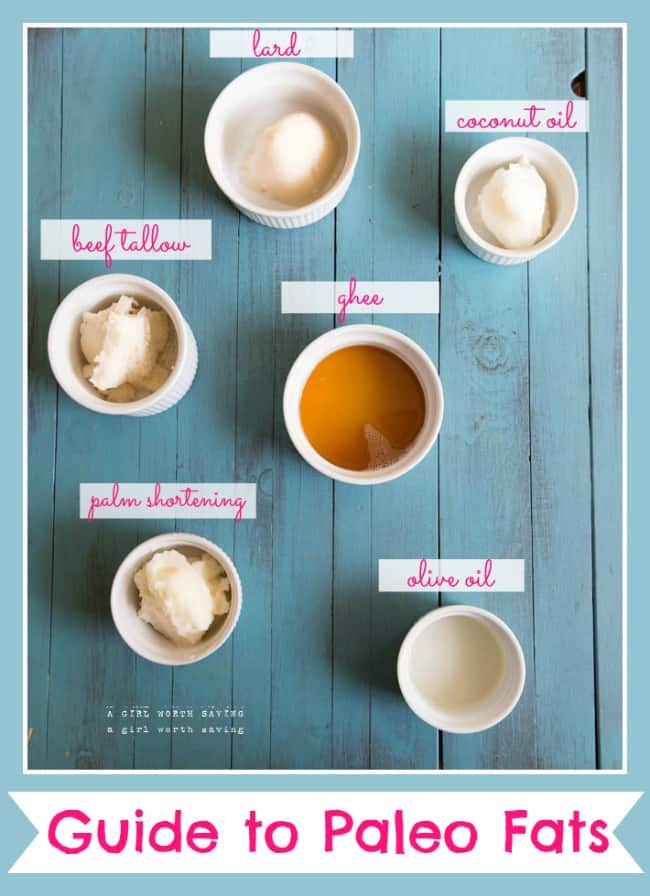 When I first stated the Paleo diet, I had no idea what were considered approved paleo fats, nonetheless how to cook with them.  After a little trial and error, I learned what were the best ways to use the following oils in my recipes.

Coconut oil is extracted from the meat of coconuts. It is high in saturated fats and so lasts for a long time, up to two years, before it becomes rancid. Coconut oil is solid under 25° and liquid above. It is perfect for frying or baking because it doesn’t break down at high temperatures. If you use it in goods which need to be set, you will have to keep them in the fridge in summer, when the liquefaction of the oil could make the whole lot melt. It only has a mild coconut flavour. Coconut oil is also great as a skin lotion or for cleaning off makeup.

Palm Shortening: Favorite Brand Tropical Traditions
Palm shortening is palm oil with some of its unsaturated fats removed, which creates a solid fat at room temperature and which has a high melting point. This fat is great for making crumbly pastries and cakes. The fat creates a well-aerated final product. It is not so good for an elastic pastry as the aeration makes it difficult to keep the elasticity. This fat also make incredible frostings for cakes.

Olive oil is created from pressing fresh whole olives. You want to use the pure cold-pressed olive oil. This has not been heated so the product retains all its properties. Olive oil is great to use cold in salads and drizzled over cooked foods. It is best not to heat it because it has a low-smoking point when it breaks down and releases toxins. To be sure you are not getting an olive oil which has been mixed with a lesser hydrogenated oil, buy from the source, which means from local olive groves where the olives are pressed on site or by a co-operative which come together to use the same press. Olive oil should be kept in dark glass bottles because the oil goes rancid in sunlight. You can keep it in the fridge but it will go cloudy if it is pure. But it returns to clear after it has been out of the fridge for a while. A test for olive oil which is not pure is that it will not go cloudy in the fridge.

Lard is pig fat, with the highest grade from around the animal’s kidneys and inside the loin. It is best to use lard from a farm-raised animal which has not had antibiotics because fat holds a body’s toxins. It is a great source of energy and has a high-smoke point and is considered by chefs to be superior to shortening. It makes a great flaky pastry and is traditionally used in Christmas pudding by the British. It also produces lovely crispy fried foods if you get the temperature to around 350°.

Tallow: Favorite Brand US Wellness Meats
Tallow is rendered fat from cattle or sheep. It is solid at room temperature and doesn’t need a fridge as long as it is kept in an air-tight container. It has a mild, pleasant flavour and it is great in baking savoury dishes and for frying at high temperatures. Tallow produces a very crispy finish. Make sure you only use tallow from grass-fed animals so that no unnatural toxins are stored in their fat. Soaps, candles and leather conditioners can also be created from tallow.

Ghee is a type of clarified butter. If you heat butter and remove the white residue, the clear golden yellow liquid which remains is called ghee. Ghee is virtually pure fat so can be tolerated by those who are lactose intolerant. Ghee is widely used in Indian cooking and is great for frying with a smoke point of 482° while butter reaches it at 350°. It also lasts longer than butter and can be kept outside the fridge as long as it is in an air-tight container.

Paleo Food List and Pantry Guide
Video Tutorial: How to make Paleo Oatmeal
Why Fat is Good For You and Your Kids
What Are the Best Type of Eggs to Get?
Are raw Eggs Safe?
Restore a Cast Iron Skillet
Guide to Paleo Flours
Naturally Dyed Easter Eggs
Previous Post: « Butterscotch Cake
Next Post: White Chocolate Strawberry Candy Cups (Vegan, AIP) »