3 Nutrients for Healthy Thyroid Function - A Girl Worth Saving 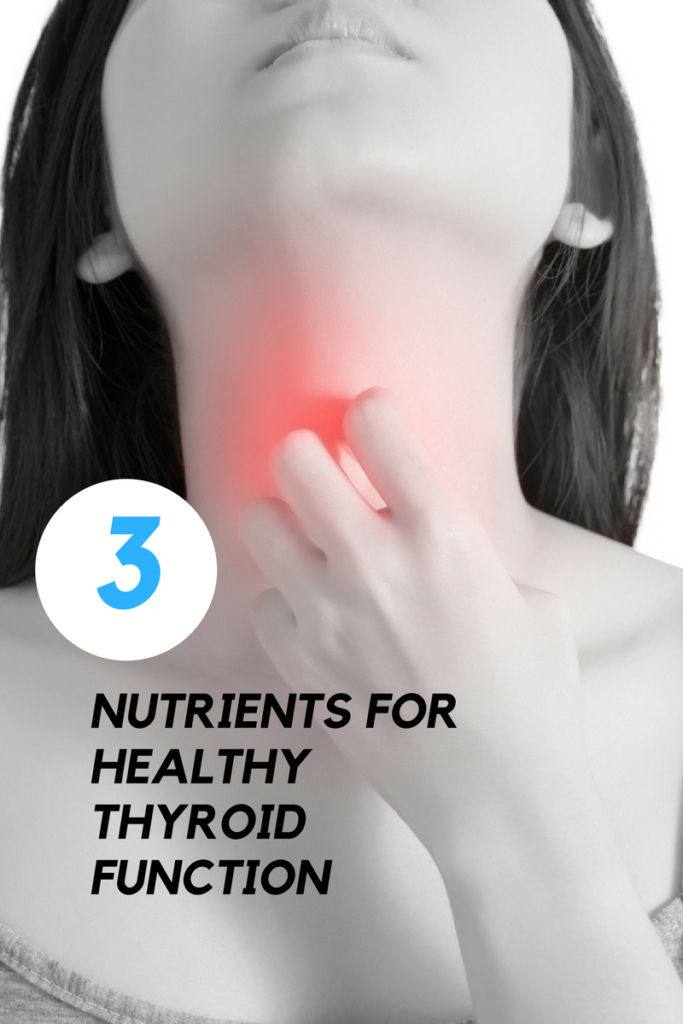 We’ve all probably heard about how important a healthy thyroid is for our bodies.

At least for me, it seems like every week I see that trademark phrase… some form of ‘The thyroid controls every metabolic action in your body. If you’re feeling tired or struggling to lose weight, it’s probably your thyroid acting up! Here’s how you can fix it!’

A paragraph or two later, you’ll likely see an ad or a picture for their shady weight loss treatment program costing exuberant amounts and promising the heavens.

Little did I know there was some truth to those statements! No, not the diet pills… Ignore those!

Rather, our bodies autonomous activities of appetite and metabolism ARE influenced by the thyroid. To be fair, it is a complex system to say the least, but research does show that the thyroid plays a leading role in this network.

Behind this matrix of thyroid health and weight loss are the ever so important triiodothyronine (T3), thyroxine (T4), and thyroid stimulating hormones (TSH).

As we get older, it seems harder to balance these hormones into ‘normal’ levels.

The American Thyroid Organization estimates that 12 percent of Americans has some form of thyroid disorder – likely hypothyroidism, or in other words, an underactive thyroid. With statistics like this, it makes sense that Synthroid is the most commonly prescribed medication in the United States!

Here’s a list of the top three nutrients for healthy thyroid functionality:

Vitamin B12 is part of the B complexes of Vitamins. These vitamins are the ones that primarily work in converting food and our diet into fuel and energy for our bodies through the day.

If you lack enough B12, you’ll feel a variety of symptoms – though the most prevalent and common is fatigue, especially as the day goes on.

According to several studies conducted with Vitamin B12 and thyroid health, approximately 40% of hypothyroid patients have a deficiency in B12.

After correct supplementation, significant amounts of hypothyroid patients reported improvements in their symptoms. The studies recommend checking B12 levels and getting it corrected if necessary.

Foods like fish, liver, milk all contain high levels of Vitamin B12.

Ashwagandha is an Ayurvedic herb that has been around for centuries.

You don’t need it to survive, though. It’s not a vitamin, like B12, that our bodies need or a mineral like selenium, which we discuss later.

However, Ashwagandha is still very useful and remains as one of the popular natural remedies for hypothyroidism.

The reason behind this is the large amount of research that proves its effectiveness in producing more of the T4 hormone. In 2014, researchers conducted a study of 60 patients where half of them took a placebo while the other half took Ashwagandha.

The latter group saw an large increase in thyroid hormone levels, helping cure their hypothyroidism! The other half with the placebo did not see any significant changes.

Another study, although this one was carried out on mice, saw equivalent results, supporting this conclusion

The thyroid gland contains the highest concentration of selenium in our bodies. Our bodies need it!

Selenium helps synthesis thyroid hormones and protects against elevated levels of iodine in the body.

According to a research study conducted in 2007 and published in The Journal of Clinical Endocrinology & Metabolism, selenium supplementation during pregnancy and postpartum, “reduced thyroid inflammatory activity and the incidence of hypothyroidism” when compared to a control group that did not receive selenium.

Unfortunately, we cannot produce this mineral on our own. The only way we can get selenium is through our diet (eggs, beef, turkey, brazil nuts.)

Diet is very important – not only for the thyroid – but many other organs! Be sure to eat healthy foods with lots of nutritional value!

A BEGINNERS GUIDE TO THE 7 CHAKRAS
Tips For A Healthy Diet In 2019
Does this Motherhood Secret Affect You?
Waking Up Well Is An Art, Not A Science
Can't Sleep? Here's a Natural Solution to Insomnia
Most Adults Are Unhealthy -- Here's How To Fix That In The New Year
Enough With the Stress: 6 Tips For Living In New York City
Best Fruits and Vegetables by Color for Good Health
Previous Post: « This Planner will Make you rethink how you Cook
Next Post: 55 Surprising uses for Coconut Oil »